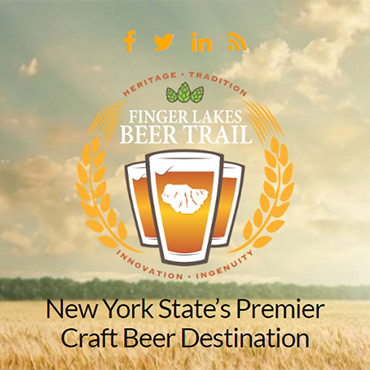 New York State’s premier craft beer destination – The Finger Lakes Beer Trail – promotes the growing craft brewing industry in the Finger Lakes, showcasing the region’s microbreweries and brew pubs. The trail is comprised of over 100 craft brewers spanning roughly 210 miles across the central part of New York State from Rochester to Syracuse down to the Corning and Binghamton areas, resulting in a trail overflowing with natural beauty along which tourists and beer aficionados alike can enjoy an abundance of delicious locally brewed beers.

Local beer-enthusiasts, Adam Smith and Theresa Hollister, recognized the need for increased awareness and promotion of the region’s growing beer culture, so in February 2011 they launched the Finger Lakes Beer Trail. Together, they form a uniquely qualified and talented team with the vision and expertise necessary to sustain a successful enterprise that increases the visibility and reputation of the Finger Lakes beer culture. Adam and Theresa are committed to enhancing and promoting awareness of the craft brewers and other brewing and beer-affiliated businesses that comprise the Finger Lakes Beer Trail – one beer at a time.

Get to Know Keuka Lake

There are so many fun things to do and see around Finger Lakes region, narrowing down your itinerary will seem like a challenge. Here are some of our favorite resources to spark your imagination.